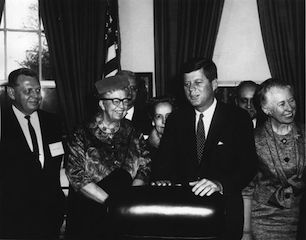 In 1961, President John F. Kennedy established the Presidential Commission on the Status of Women (PCSW). At that time there were over 400 pieces of legislation affecting the status of women being considered by Congress, but few became law. These related to women’s pay and status in the workplace, their access to contraception, and the Equal Rights Amendment (ERA), to name a few. Up until that time, most of the legislative actions affecting women were protective labor laws that created workplace conditions thought “appropriate” for women in the labor force. Many women’s advocates at the time were concerned that these laws actually gave employers an excuse not to hire women and were interested in getting national attention to change the discourse on women’s rights from protection to equality.

In the fall of 1963 – fifty years ago – the Commission issued its report to the President, the Congress, the Senate, and the nation. It criticized the inequality women faced in many areas of American society and made recommendations on how to improve women’s lives. For example, it made policy recommendations on expanding women’s access to educational opportunities, jobs with equal pay and childcare, paid maternity leave, among many other issues. The Commission was chaired by Eleanor Roosevelt until her death in 1962, and included a number of key women leaders, including Esther Peterson, the head of the Women’s Bureau at the U.S. Department of Labor, Dorothy Height, President of the National Council of Negro Women and Dr. Mary Bunting, President of Radcliffe College. Although there were few women at that time serving in elected office, the PCSW did include a woman senator and two women representatives.

What do Women and their Families Need Now?

In reviewing the Commission’s recommendations, it is striking how many of them refer to issues and public policies that women are still fighting for today. It is now more than 50 years since President Kennedy received the findings of the PCSW and it is important to measure women’s progress - and lack of progress – over the last five decades. There is, indeed, a substantial “Unfinished Agenda” in many areas affecting women’s place in the workforce and in the political sphere.

It is in the spirit of understanding the past to catalyze future action that the Center on Women in Politics and Public Policy (CWPPP) is celebrating what has been achieved for women’s rights and political leadership, and is renewing our commitment to address the range of inequities that remain.

Hosted by ScholarWorks at UMass Boston