When, as editor of this journal I thought of “student scholars” (rather than “students as scholars”) as a part of the theme of the present issue of Human Architecture chronicling the award-winning papers of the Esther Kingston-Mann Student Achievement Awards for Excellence in Diversity and Inclusion Scholarship, I meant to suggest that “student scholars” could be more diversely and inclusively deﬁned and celebrated. It is a great achievement, personally, for students to be and to become serious scholars, but it is equally important, it seems to me, that their families, mentoring faculties, and supporting administrators also be “student” scholars, in the sense of making the cultivation of students’ scholarship and talents central to their own work as parents, teachers, organizers, and administrators. The celebration that night was not just that of and for the students, but also that of and for the supporting networks of all those who made it a high priority to organize and to be there that night. The notion of “student scholars” can therefore be a much broader one that includes the students and their supportive communities of parents, faculties, award-organizers, and administrators. It can be read in both ways of students doing scholarly work and scholars and university administrators cultivating and celebrating, with student parents, student learning excellence. I think Hubie Jones that night expressed very well this broader notion of the communities of hope when he built his presentation so eloquently on the idea of “microcosms.” Jones’s main point was that the best way to bring about change and transformation in favor of a more tolerant, diverse, and inclusive world, is to be it in our microcosms of everyday life. It is not sufﬁcient just to promise a better and more hopeful future, but to try and be the hope and to realize it in the microcosms of our everyday lives at home, at school, and at work. That evening was itself a microcosm of hope—hopeful of what an educational experience can and should achieve.

“Without Ever Leaving the Ground, She Could Fly”: Ecofeminism and Soul Fulﬁllment in Toni Morrison’s Pilate
Jessica Gama

Olaudah Equiano: Facts about his People and Place of Birth
Friday Onyeoziri

Tutoring Down the Rabbit Hole: The Inner-City Classroom, and What I Found There
Manda Lynne Kindle

The Experiences of Women in Computer Science: The Importance of Awareness and Communication
Mia L. Parviainen 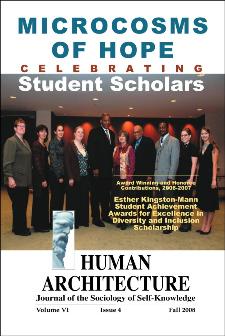