Plus Proceedings from the Panels on "Buddhist Contributions to Social Justice" at the Fifth International Buddhist Conference on the United Nations Day of Vesak held in Hanoi, Vietnam, May 2008.

This issue of Human Architecture: Journal of the Sociology of Self-Knowledge is dedicated to an exploration of Thich Nhat Hanh's Engaged Buddhist philosophy and spiritual theory and practice from a sociological and social scientific vantage point, in order to highlight the significance his teaching bears for the development not only of a self-reflective, but also a globally humanist, as well as environmentally concerned, sociological imagination. This issue is comprised of four parts that follow an opening keynote by the Interim Provost and Vice Chancellor for Academic Affairs at UMass Boston. In the first part several recent talks, letters, and a poem, by Thich Nhat Hanh on the meaning and practice of Engaged Buddhism--in regard to issues ranging from war and conflict, the environment, food industry and consumption, and history of Engaged Buddhism, are included. The second part of the volume is devoted to four articles that put Thich Nhat Hanh's views on and practice of Engaged Buddhism in social science and sociological contexts, specifically exploring the overlapping landscapes of Engaged Buddhism with Pragmatism, Deep Ecology, sociological discourse and imagination, and ideological analysis. The third part includes seven contributions of varying lengths that are highly illustrative of the ways in which Thich Nhat Hanh's teachings have engaged with issues such as: international political conflict; bringing mindfulness and meditation to the classroom in educational context; introducing spiritual awareness and mindfulness practices to policing strategies in U.S. cities; incorporating mindfulness and meditative healing practices in Massachusetts among traumatized populations due to war and conflict in East Asian context; introducing the central concepts of Engaged Buddhism into economic theory and practice; reflections on the significance of Engaged Buddhism for developing successful strategies to tackle the environmental crisis and climate change; and finally brief personal reflections on the meaning of Engaged Buddhism in facing family loss and trauma. Finally, in the final part, a critical commentary by a participant's experience of attending one of Thich Nhat Hanh's retreats in 2005 is included. It is followed by a response and reflections from a representative of Thich Nhat Hanh Plum Village community in France.

“Please Call Me By My True Names"
Thich Nhat Hanh

Pragmatism and ‘Engaged’ Buddhism: Working Toward Peace and a Philosophy of Action
Michael C. Adorjan and Benjamin W. Kelly

Mindfulness, Compassion, and the Police in America: An Essay of Hope
Michael J. DeValve and Cary D. Adkinson

Healing from War and Trauma: Southeast Asians in the U.S., A Buddhist Perspective and the Harvard Program in Refugee Trauma
Robert Brian Wall

Peace in Oneself, Peace in the World: The Real Heart of Engaged Buddhism, A Response to Lisa Kemmerer
Barbara Newell 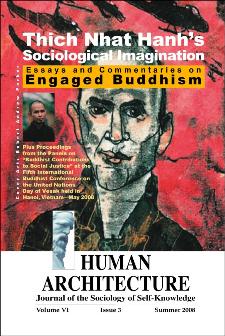