Proceedings of the International Conference on "The Post-September 11 New Ethnic/Racial Configurations in Europe and the United States: The Case of Islamophobia" | June 2-3, 2006 | Maison des Sciences de l'Homme Paris, France.

This is a journal editorial note to the proceedings of the international conference on "The Post-September 11 New Ethnic/Racial Configurations in Europe and the United States: The Case of Islamophobia" organized by Ramón Grosfoguel (U.C. Berkeley) and Eric Mielants (Fair-field Univeristy) at the Maison des Sciences de l'Homme in Paris, France, on June 2-3, 2006. The editorial note argues that the charges made by critiques of the term Islamophobia (claiming that its use discourages and closes possibilities for criticism of Islamic ideas and practices) are unfounded and not cognizant of the original set of meanings clearly built into the definitional framework of the term as stated in the Runnymede Trust report published in 1997. The essay then appreciatively recognizes the contributions included in the volume in terms of setting Islamophobia in a world-historical and economically non-reductivisit conceptual framework while acknowledging the contemporary and post-September 11 attributes of Islamophobia. The essay also acknowledges the value of the collection of articles and the conference of which they were a result in recognizing, among others, the epistemic foundations of Islamophobia (and similarly Hispanophobia) as forms of racism, and the need for seeking alternative hybrid epistemologies of self- and world-historical knowledge and transformation in dialogue with critical and liberating spiritual and secular knowledges and practices as found within and across Islamic, Hispanic, Western, and other civilizational traditions.

Islamophobia/Hispanophobia: The (Re) Conﬁguration of the Racial Imperial/Colonial Matrix
Walter D. Mignolo

How Washington’s ‘War on Terror’ Became Everyone’s: Islamophobia and the Impact of September 11 on the Political Terrain of South and Southeast Asia
Farish A. Noor

Muslim Responses to Integration: Demands in the Netherlands since 9/11
Abdulkader Tayob

No Race to the Swift: Negotiating Racial Identity in Past and Present Eastern Europe
Manuela Boatcã 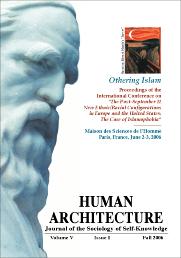